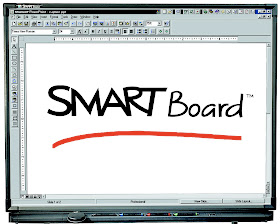 In a surprise victory for the technoskeptics of the world, the Québec government announced today that it is scrapping the previous government's plans to buy 40,000 smartboards for Québec public schools. Speaking to La Presse, Education Minister Marie Malavoy commented, "It was a comprehensive program that, after examining the evidence, didn't seem to be the best option." Malavoy further noted that school boards didn't actually want the smartboards--"The problem was that the smartboards didn't really line up with the needs of the school boards and the schools. They didn't ask for them. It wasn't a choice they made."

Interestingly, this development comes a few months after La Presse revealed that the company that makes smartboards (Smart Technologies) had, in 2011, hired Martin Daraiche,  a lobbyist who had previously worked as an advisor to both former Liberal Premier Jean Charest and former Deputy Premier Nathalie Normandeau. The mandate that M. Daraiche was given was to ensure that "a directive was established following the [government] budget which would confirm the mandate to furnish every classroom with an interactive blackboard in order to improve student success." Evidently, given the level of success that smartboards had under the Liberals, M. Daraiche's lobbying efforts met with some measure of success.

In Science in Action (1987), Bruno Latour talks about a popular (but, in his view, false) conception of technological progress that he calls the "diffusion model." In this model, worthy ideas and technologies seem to spread and multiply under their own steam, without human intervention. Latour comments at some length:


...it seems that as people so easily agree to transmit the object, it is the object itself that forces them to assent. It then seems that the behavior of people is caused by the diffusion of facts and machines. It is forgotten that the obedient behaviour of people is what turns the claims into facts and machines; the careful strategies that give the object the contours that will provide assent are also forgotten...the model of diffusion invents a technical determinism, paralleled by a scientific determinism. Diesel's engine leaps with its own strength at the consumer's throat, irresistibly forcing itself into trucks and submarines, and as to the Curies' polonium, it freely pollinates the open minds of the academic world. (p. 33)

As Latour explains, people work very hard on behalf of both ideas and technologies to construct strategies that will make them "just catch on." If these strategies work well, no one will ever notice them--the machine will simply have been "built right" and will have "really caught on." Smart Technologies tried hard to do this in Québec classrooms and failed. But it is instructive to realize that it is the failures that we notice and not the successes, which are all around us. Cellphones are a great example of a technology where we have bought into the diffusion model wholeheartedly; we have forgotten all of the strategies that were pursued in order to make cellphones appear necessary.

Are some of you out there reading this teachers and professors that are struggling with technologies that are trying to inevitably diffuse their way into your classroom? Is a smartboard or clicker system that will revolutionize student success just around the corner for your little nook of the educational realm. Tell us about it in the comments.